X
This site uses cookies to provide and improve your shopping experience. If you want to benefit from this improved service, please opt-in.
More Info
Accept Cookies
Strings DirectGuidesWhat’s a wound 3rd and do I need one?
Menu
Guides, Guitar lessons, tips & tricks, String Talk

What’s a wound 3rd and do I need one?

Throughout your guitar playing life, chances are you may never have considered whether your 3rd string should be plain or wound. The vast majority of sets sold nowadays come with a plain 3rd (for electric guitar anyway) and comprise of 3 plain strings and 3 wound strings (or more if you play 7, 8, 9-string etc.). The use of a wound 3rd in electric sets is certainly not as popular today as it was many moons ago.

In fact, before the 60’s, string gauges were pretty heavy and came with a heavier wound 3rd string which often proved tough on the hands… even for players with ‘Stevie-Ray strength’ fingers. In the 60’s, there became a growing trend towards players wanting to use lighter gauge strings. In order to achieve a lighter set, they would often discard the lowest 6th string from their heavy sets but replace it with a thin banjo string as their high E, thus creating a lighter overall gauge which now included a plain 3rd. In fact, it was quite common for players to use a very light plain 3rd string, allowing them to make big bends which were previously achievable with such ease.

That being said, there is still demand for sets with a wound 3rd string. You’ll tend to find these are mostly found in heavy gauge sets. Jazz players tend to use heavier gauges, which is why you’ll often see many flatwound sets (a jazz player’s staple) accompanied by a wound 3rd string.

So what is the difference between a wound 3rd string and a plain 3rd string? What are the different tonal properties and how do they feel? Below, we’ll try and offer up answers to all of these questions enabling you to make a more informed judgement on whether you want to take the plunge, roll back the years and try something a little bit different.

What’s the difference between a wound string and a plain string?

In short, a plain steel string is simply one piece of cylindrical steel wire with a ball end attached at one end. The thickness (diameter) of the steel dictates the string’s gauge. On the other hand, a wound string is made up of two parts; a central core wire and an outer wrap that travels around this core, again with a ball end attached at the end. The combination of these two parts makes up the overall gauge of the wound string.

If a set of strings was to be made solely of either wound strings or plain steel strings, in reality, they would neither be practical nor tonally pleasing in either case. Let us explain:

As we’ve previously mentioned, a wound string is made up of two components; its central core and its wrap wire and the combination of these parts when added together create the overall diameter (or gauge as we refer to it) of the string. So if we were to take a standard .026” gauge D-string, this could be made up of a .010” central core with a wrap wire of .008” (see below) 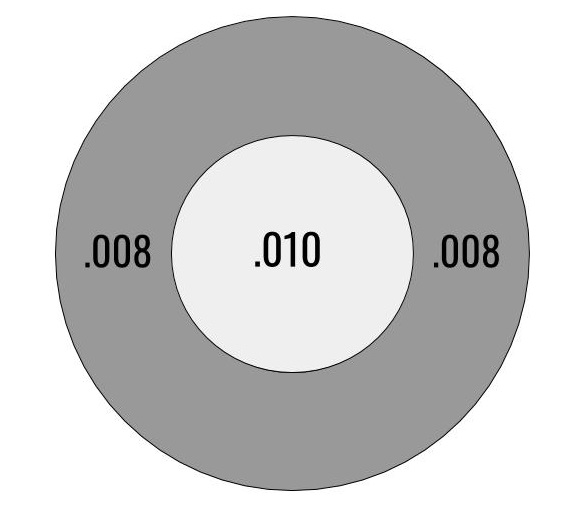 As you can see, even the thicker gauge strings in our sets are made from pretty thin gauge cores and outer wire. With that in mind, if we were to have a wound .010 string (or lighter), this would perhaps require a .006 gauge core with a .002 wrap… ultra-thin stuff here!! Too thin in fact and a string constructed in this way simply wouldn’t be able to withstand the tension required to get close to pitch without breaking, and if it did reach pitch, chances are it wouldn’t cope with much playing before eventually snapping on us.

So on the flip side of this, what about a full set of plain steel strings? Well, these wouldn’t be much better either we’re afraid.

In fact, to test this out I replaced the wound 4th on my Telecaster (.026) for a plain 4th string of the same gauge. Straight out of the packet, I could immediately see and feel the difference in tension between the two. Held up next to each other, the plain string stood proud whereas the wound string just flopped over.

Played open with no fretting or playing big open chords sounded fine. However, where the difference became apparent was fretting further up the neck. In the higher registers of the fretboard, the string started to sound out of sync with the rest of the set and developed tuning issues. Even played by itself higher up, the string sounded very odd, lacked sustain and when played as part of smaller 2-3 note chords, it sounded just plain strange (pun intended)!

So what about a wound 3rd? What do they sound and feel like? Are they right for me?

Being a light gauge player, for me, wound 3rd strings had always been reserved for heavier gauged sets or strings specifically tailored towards Jazz players, but I tried a variety of wound 3rd gauges on my telecaster (ranging from .017 up to .020).

Upon first playing a wound 3rd, I must admit, I was pleasantly surprised. They delivered a nice warmth, rounding out the tone of the set nicely. However, bending the wound strings wasn’t particularly easy. Naturally, the .017 was the most forgiving, however, the heavier gauges like the .019 and .020 were particularly tough going. It always felt like they were ‘fighting back’ and as a result there was always the danger of them slipping from under your fingers if you’re not careful. If you like to bend the strings and be a bit more expressive with your vibrato, using a wound string wouldn’t really help you achieve this.

The wound 3rds certainly gave the set a darker character and a less ‘jangly’ tone as they didn’t have that ‘snappiness’* you usually get from plain strings. (*Granted, ‘snappiness’ is probably not the best adjective to describe a guitar string.. Gulp!).

Despite this, they delivered a nice warmth that would be desirable for some players, particularly those solely playing rhythm guitar or those trying to tame a bright sounding instrument. If you’re a guitar player that’s exclusively playing chordal work, a wound 3rd would definitely be an interesting avenue to explore.

Some guitarists often find plain 3rd strings to be a little harsh and the G stands out too much against the other strings. If you find yourself in this situation but don’t necessarily want to opt for a lighter plain string, it might be worth considering the use of a lighter wound gauge such as a .017. This would mellow out that shrilly (definitely a word…No seriously it is!!) tone whilst still retaining some flexibility to bend the string.

What about acoustic guitars?

If you play the acoustic guitar, you’ll be well aware that most acoustic sets come with a wound 3rd as standard, however, some of the bigger string manufacturers such as Ernie Ball, D’Addario and Rotosound also make sets available with a plain 3rd.

It’s worth noting that these sets typically come in a lighter overall gauge (10’s and sometimes 9’s) and the inclusion of the plain 3rd string means the top 3 treble strings (G, B and E strings) mirror the top 3 strings of a standard electric set. 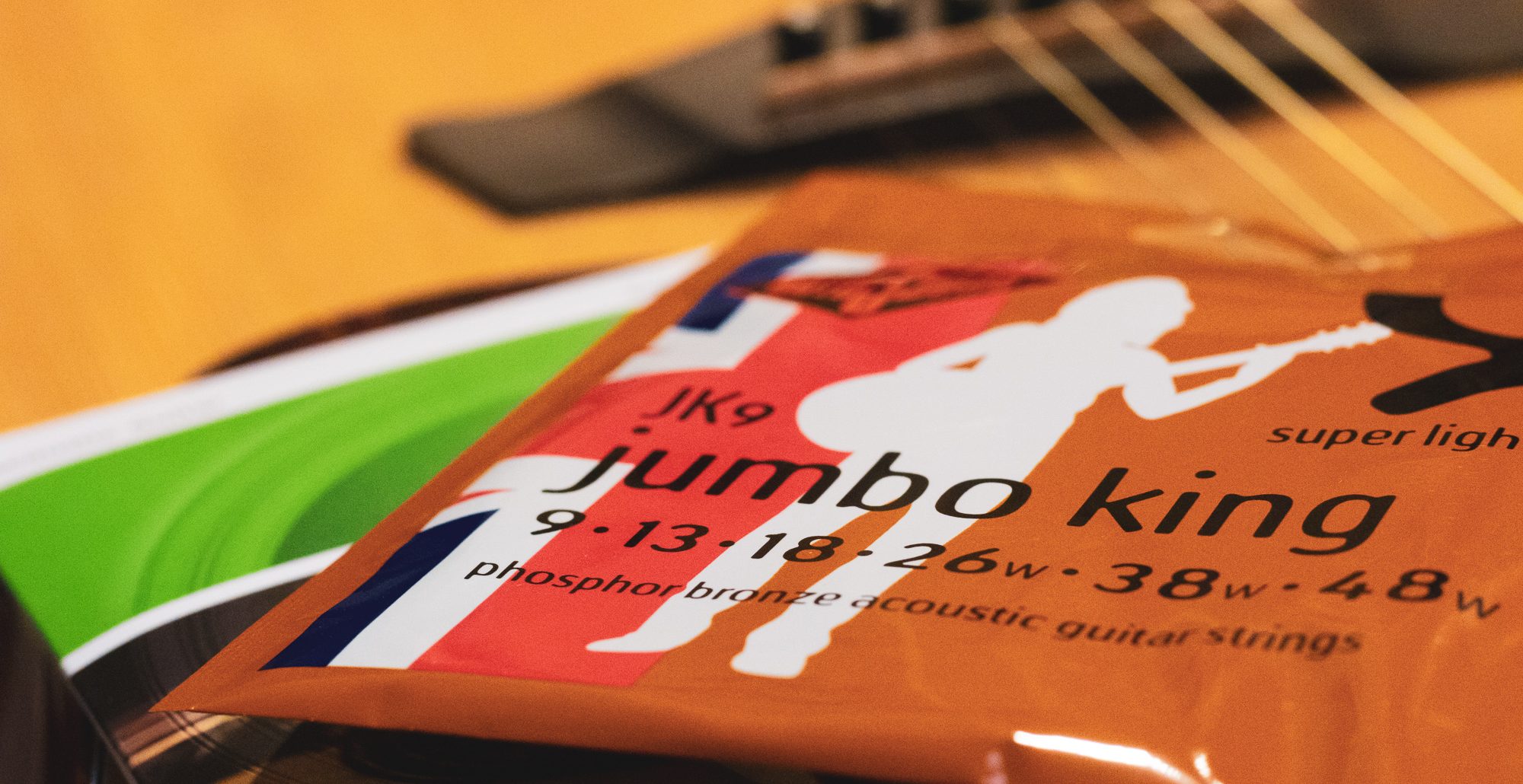 I tested the Earthwood Rock ’n’ Blues 10-52 (plain .017) Set by Ernie Ball on my Sigma Acoustic. Initially, simply strumming chords on these strings didn’t feel or sound too dissimilar to a standard set with a wound 3rd. The plain .017 had more of a snappier tone to it and playing single note lines and bends were noticeable easier in comparison to a wound G. If you like to play your acoustic guitar in a similar fashion to your electric, having a plain 3rd would certainly be advantageous.

However, what the plain .017 did seem to lack was the oomph and punch that a wound 3rd delivers. After changing back to a wound 3rd, immediately, I noticed a marked difference and the guitar seemed to recapture it’s warmth and rich character. It gave a much fuller sound and (to my ear) a better overall tone. I was certainly surprised by the impact this seemingly minor change had.

If you did fancy trying a plain 3rd on your acoustic guitar, our recommendation would be to buy an additional plain 3rd string next time you buy a set of acoustic strings. We’d also recommend putting this on your set first, that way, if you don’t like it, you always have your trusty wound 3rd ready to replace it if it’s not to your taste :-).

Although this appears to be a fairly simple and innocuous change to make to a guitar, we consulted our guitar tech Chris Ward to see if there’s anything technical we need to be aware of when changing our G-string from a plain 3rd to a wound 3rd.

Chris says;
“Wound strings and plain strings intonate differently from one another. As a result, you’ll often find that you’ll need to make an intonation adjustment on the G to avoid any tuning issues.

It’s also worth being mindful that if you have a fixed compensated bridge (like those found on a Gretsch or Les Paul Junior) most are purposely configured for a particular string layout (e.g. 3 plain & 3 wound strings, or, 2 plain & 4 wound strings). If you do have a bridge like this and you’re thinking of changing from a plain 3rd to a wound 3rd (or vice-versa) be mindful that intonation issues can’t be easily changed as the saddles are fixed in position. As a result, if you do come across intonation issues, you may need to source an alternative bridge that accommodates this change in string set up.

We hope that these couple of experiments have given you an insight into the variations between plain and wound 3rds. For today’s modern style of playing, it’s clear to see why plain strings are more widely used in most sets and why wound strings are preferred to help deliver that breadth of tone in the low end.

If you did need any further guidance on this or any other topic, please feel free to leave a comment below or drop us an e-mail… we’re always happy to help out where we can.

Thanks for reading, see you next time!