This site uses cookies to provide and improve your shopping experience. If you want to benefit from this improved service, please opt-in.
More Info
OK
Message us on WhatsApp: 07807504443
Strings DirectGuidesHow many windings around your tuning post?
Menu
Guides, Guitar lessons, tips & tricks 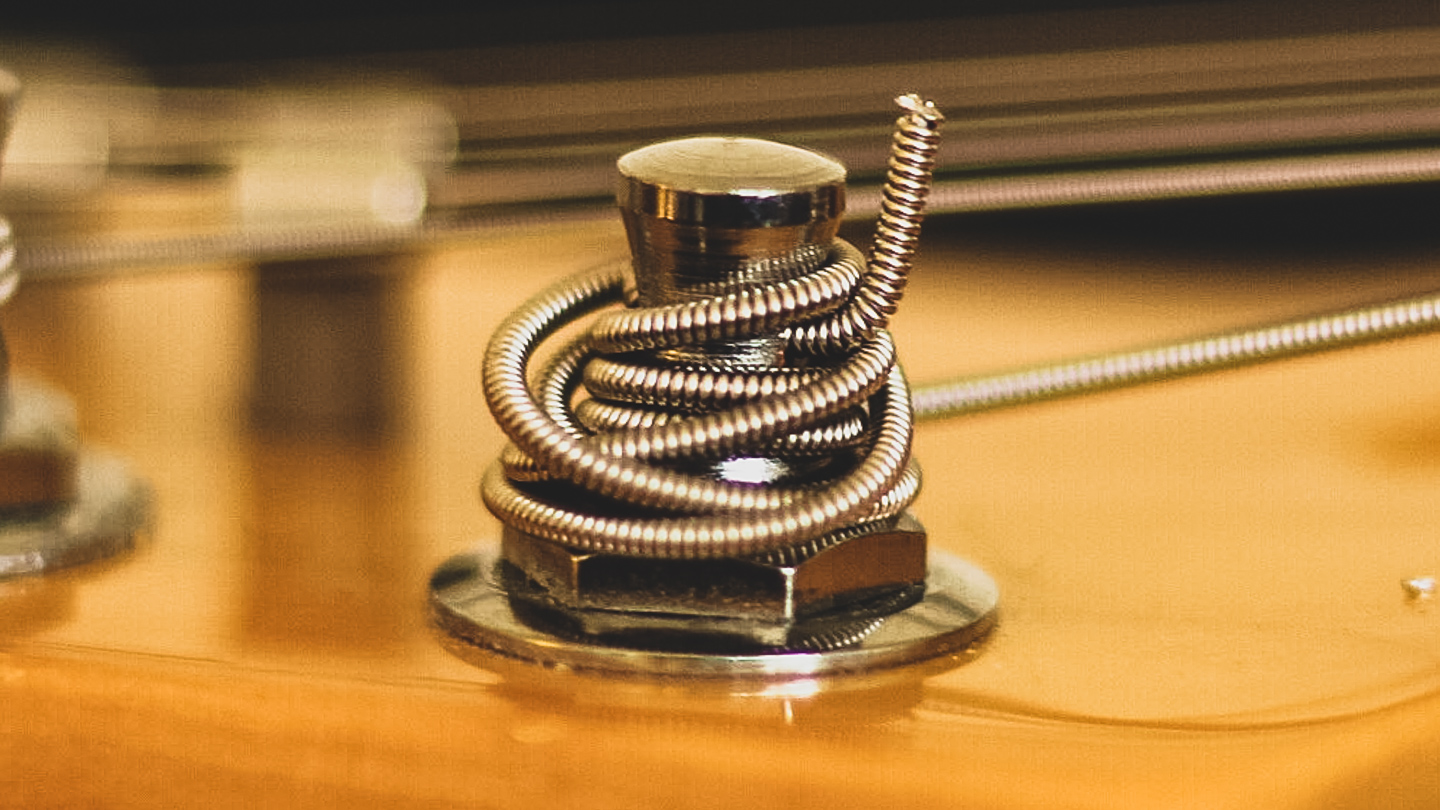 Everybody has ‘their way’ of stringing up an instrument. Take a look at a few different people’s guitars and you’ll no doubt see a multitude of ways they have been restrung; some conventional and some more unconventional, for sure. One thing that you may or may not notice is how many windings they have around the machine head post.

Does it really matter?

In reality, it’s not the end of the world if you have three windings or if you have four. We did hear that B.B. King was known for winding the entire length of the string on at one point. He had a serious tone and it didn’t do him any harm, but whilst you aren’t going to cause any harm to your guitar by having loads of string wrapped around your tuners, having more (or less in some instances) can create certain issues that you may not have considered, which we’ll offer up some thought on in this blog.

So how many do I need?

Honestly, probably not as many as you may think. Anywhere between 2-4 windings will be plenty and, so long as you are restringing your guitar in a conventional way, this should ensure that you have enough tension in your string to maintain your tuning and avoid any string slippage.

Let’s face it, we’ve all seen it: the machine heads that look like they’re going to a fancy dress party dressed as the Michelin Man squad. Too many windings around the post doesn’t necessarily look the part and they can have bulbous bits of string that start to wind over each other… for some, that’s just not an issue, but for others, it can be an eyesore. This is one of those points that may be prevalent for some players, and not for others. We’re with the former and like our machine heads to look nice and neat.

If you’ve ever tried to remove a string from a guitar with lots of wraps around the string post (especially on the low strings), you’ll know that trying to wrestle the string away from the tuning post can feel like a real pain in the proverbial. The windings just seem to cling on to the tuning post and it can sometimes seem like a never-ending game of pass the parcel… will you ever get to see the tuning post? 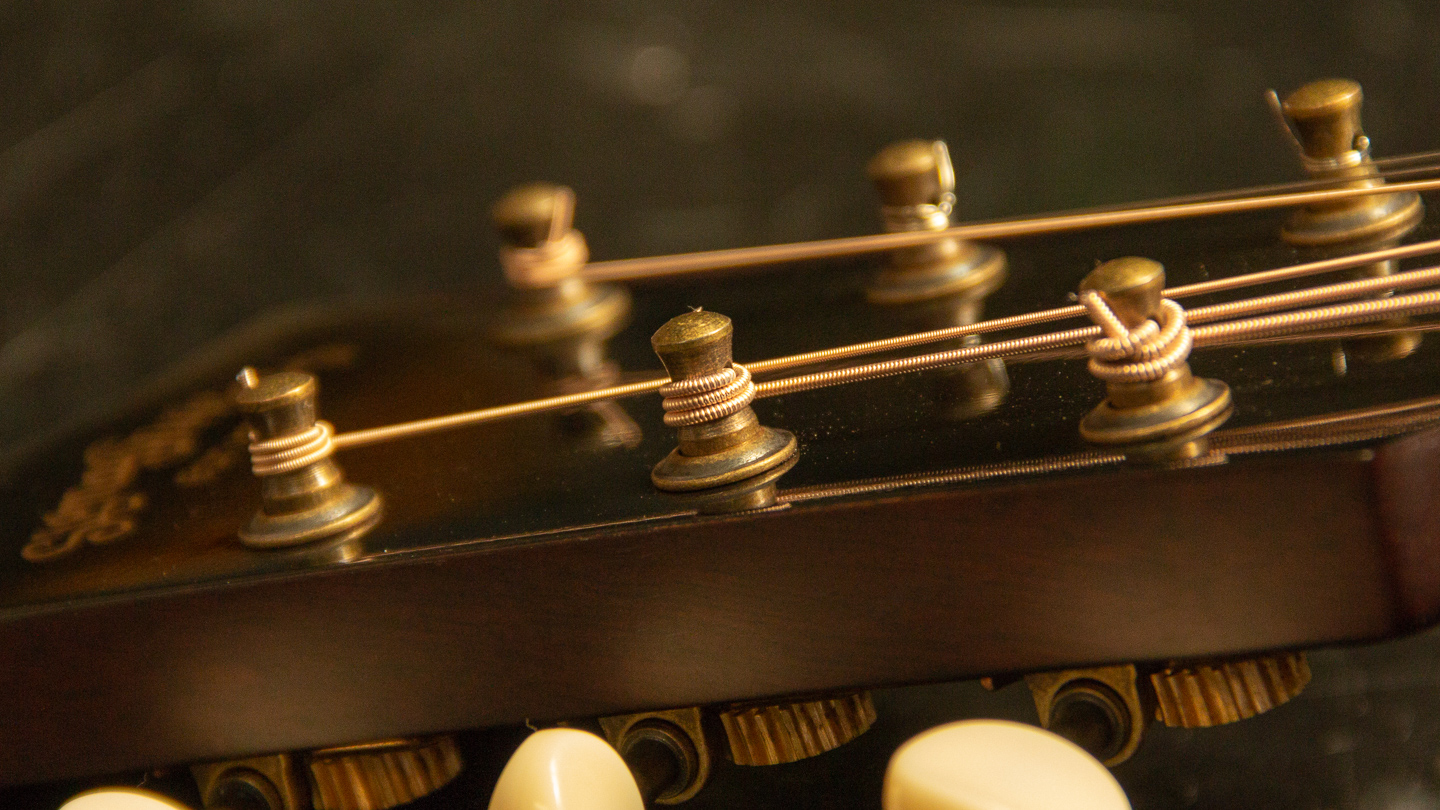 A good restringing technique is to always make sure your windings travel down the tuning post. This is true for all guitars with vertical string posts (as opposed to guitars with slotted headstocks).

A tuning post will only be able to accommodate a certain number of windings before there is no post left to wind around – particularly on the thicker strings.

If you are winding a lot of the string around the tuning post, you’ll inevitably find that the first few windings will be nicely wound, but the last few windings will have no choice other than be wound back up the post and over the existing windings you have just put on. This can create two issues:

1) When you carry on winding, the new wraps are just gripping onto the first layer of string windings and not the post itself. There’s far less grip on the string than there is around the post so this can lead to the string slipping, and not to mention the compression of winding on winding which can cause annoying tuning instability.

2) As the string goes back up the post, you run the risk of losing that all-important break-angle over the nut. A good break angle will help intonation, increase sustain and can reduce the likelihood of the string buzzing at the nut.

So what determines how many windings I have?

Good question. The simple answer is the amount of initial slack you leave on your string before you start winding it around the post.

What’s slack I hear you ask? Slack refers to how tight you have the string before you start winding it around your tuning post. If you thread your string through the bridge of your guitar and bring it up to the tuning post with enough tension so it’s relatively tight, the string will have little or no slack. However, bringing the string up to the headstock and leaving it a little floppy means there’s some slack left in the string.

The easy way to remember is;

Less slack on a string before winding = Fewer windings

More slack on a string before winding = More windings

Looked at from another perspective, slack can be observed as how much string is put through your post before you start winding.

How do I make sure i get the right amount of slack?

Here are a couple of techniques you may wish to try to ensure you get the right amount of slack in your string before you start to wind your strings around the tuning post:

1) Measure two tuning posts further and then pull back.
Start by threading your string through your bridge as normal, and then bring the string up to the machine heads. From there, hold the string tightly just behind the post with one hand (leave no slack). Now, while maintaining that small amount of tension slide that hand back a further two machine heads. For example, if you are stringing the Low E-6th string, grab the string at the D-4th String tuner. Now you have that length, using the other hand, pull the string back (and the hand you’re grabbing the string with) to the machine head you are using. This will create the correct amount of slack in the string. From here, you can start to string up as normal and be confident you won’t have too many or too few winding around the tuning post.But what happens when I run out of tuning posts to use as a guide? There is no exact science here so just use your judgement and roughly measure the distance of two machine heads on. A few millimetres out here or there won’t make too much difference. Just eyeball it!!

Try these techniques out and see which one you find suits you best. These are just suggestions, so if you have another way of getting the right amount of slack then go for it. There’s no right or wrong way, just so long as you achieve the right amount of windings in the end.

Should you have a different number of windings depending on which string you are restringing?

If you use the above technique for each of your strings, you will notice that due to the thinner gauge, you naturally achieve more windings around the posts for the same amount of slack. Most players prefer a few more windings around the higher pitched strings’ posts anyway so this doesn’t create too much of an issue. Furthermore, due to the thinner gauge, they take up less room around the tuning post so there is a lot less risk of you running out of room and having to wind the string back on itself.

For players with guitars that don’t have a pitched (or angled headstock) such as a Strat or a Tele, one useful tip is to ensure you have a few more windings of string around the posts of the 3rd, 4th and 5th strings. The reason being that sometimes these strings don’t always use a string tree to pin the string down which would otherwise improve a good break angle over the nut. Therefore adding a few more windings down the post (achieved by increasing the amount of initial slack before winding) will naturally create that little bit extra angle away from the back of the nut.

Does it matter what type of machine heads I have?

The principle of leaving enough slack in your string prior to winding them on is the same for most styles of machine heads but we’ve outlined some different techniques below you may want to consider.

Slotted Machineheads
The original safety style machine heads – initially used on Fenders back in the 60’s – are still popular nowadays and require you to trim the string prior to threading the string down the post. Trimming the string in the correct position will ensure that you get the correct amount of wraps around the tuning post. So where’s the best place to cut the string? In a similar fashion to technique number one above, thread the string through the bridge and bring the string up to your headstock with no slack in it. From there, measure two machine heads further on (away from the machine head you are tuning) and make a kink (small bend) in the string. Then cut the string an inch beyond this kink.

From here you can thread this inch of string down the post and start winding the rest of the string around the tuning post as normal.

Locking tuners
One of the main advantages of having locking tuners is that they negate the necessity of winding a string around a post. 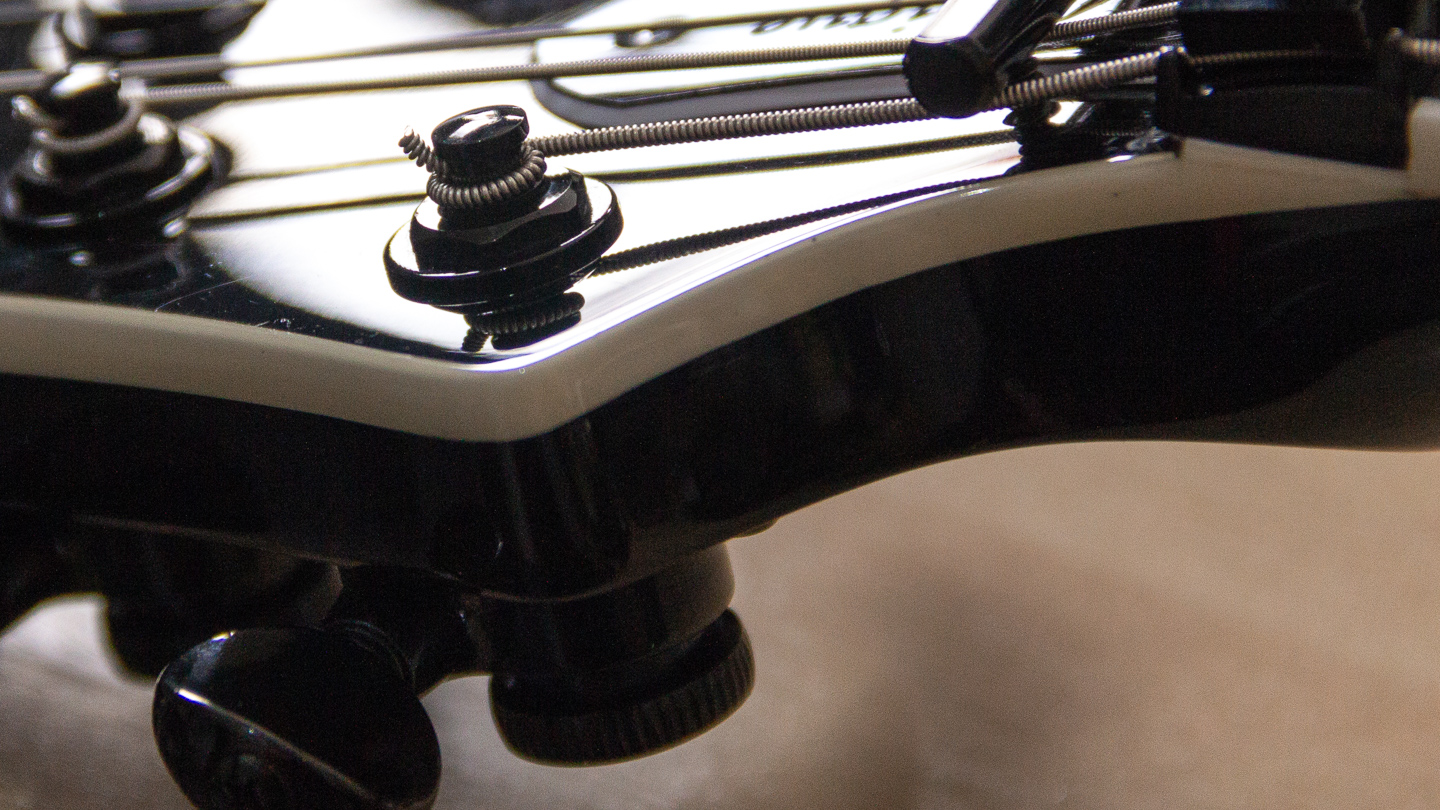 Simply pull the string through the post, lock the string in position and tune-up. There is no need to wind the string around the post as the locking mechanism is carrying out the job for you. Ah, restringing bliss! There is one caveat to this, we would suggest leaving about 1cm of slack so there’s a small amount string wrapping around the back of the post. This stops all that pressure residing on a small point.

Concave machine heads – Scoop in the middle
Some machine heads are designed with a scoop in their centre section. As a result, the wraps around the tuning post will want to gravitate towards the slimmer part of the tuning post, i.e. the central part. This can prove a small issue as ideally, you want the string to be wound down the post. The lower position helps create the desired break angle so, again, it may be worth aiming for a few more windings around this type of post to help overcome this.

Hopefully this serves as a fairly comprehensive guide to getting the optimum amount of slack and winding around your machine heads for best performance. There are a few methods which all end up with the same result; all you need to do is find the one that works best for you and stick with it. With practise you’ll get quick and efficient at it and never have to worry again. Good luck!