This site uses cookies to provide and improve your shopping experience. If you want to benefit from this improved service, please opt-in.
More Info
OK
We're on email: info@stringsdirect.co.uk
Strings DirectBrand SpotlightsExperience the elixir of guitar strings at Strings Direct
Menu
Brand Spotlights

Experience the elixir of guitar strings at Strings Direct

Founded in 1995, the Elixir crew originally dealt mainly with instrument cabling and serendipitously discovered that Polytetrafluoroethylene (PTFE) coated strings worked well as cables, but the less than stellar audio feedback meant that they couldn’t cut it as guitar strings. The team knew that they had stumbled onto something and immediately began to fine-tune their products to match the timbre and output of industry standard strings, working extensively with passionate guitarists around the world in a push to tweak their strings to match even the most precise requirements.

Elixir continued to work without pause to identify which coatings would be ideal for the strings of various instruments and we’re delighted to be able to share many of these Elixir string sets with you at Strings Direct, further backing up our guarantee to provide only the finest products from the most innovative, dedicated brands.

Elixir products across a myriad of specifications at Strings Direct 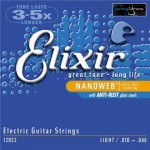 Our official nickel-wound anti-rust Elixir electric guitar strings are available with both a NANOWEB and POLYWEB coating, with each coating providing a different tone and feel for the guitarist, we’d recommend experimenting with both coatings to find the ideal string coating “flavour” for your own playing style and musical preference.

We think that the Nanoweb coating sounds closer to an untreated string, responding to play by offering a much more traditional sound, whereas Polyweb coated strings offer a richer “more played in” sound.

Strings Direct offers Acoustic Guitar strings from Elixir with a bronze or phospor bronze finish, a string set choice which has been described as the most expressive, sensitive and coveted set up for serious guitarists.

A little extra from StringsDirect – a hands on review of the Elixir string set from an expert guitar player:

“I have been using Elixir strings on both my acoustic and electric guitars for 8 years now and I’m extremely happy with how they sound, feel and last. They really are the Rolls Royce of strings and are excellent quality additions to my guitar.

Both the electric and acoustic sets have a unique Polyweb coating; this keeps the strings in a “like new” state for a much longer period of time compared to other strings.

Elixirs are brighter than other strings, and punchy, with a solid feel under the fingers.

They are much smoother feeling strings than others, plus they make less noise when position shifting due to their smooth coating.

Elixirs don’t rust, not that I’ve ever had a set of strings on long enough or have sweaty hands that rust strings. But saying that, I have opened old sets of regular uncoated new strings only to find them corroded slightly.

There is also a newer version that boasts a coating called Nanoweb.

Nanoweb is a thin layer of PTFE (Polytetrafluoroethylene) also known as Teflon.

Nanoweb coated strings feel more like traditional strings as the coating is much thinner than Polyweb, these can also last 3 times as long as regular strings if not longer.

I own 12 guitars and they’re all worth that little extra to have Elixir strings. I use quite high-end guitars like my PRS custom 22 and Taylor acoustic, these can often sit in cases for long periods of time so I need strings that stay fresh. Elixirs always come out sounding fresh, lasting much longer than any other strings I’ve ever used .

I have tried other coated strings in the past, some which left a black residue both on my fingers and on my maple fingerboard which I was not happy about.

Elixirs don’t leave any residue and so I’ve stuck with these strings and am very happy with them in every respect.

Do you already own products from Elixir? Are any Elixir string sets on your current wish list? We’d be delighted to hear from you on any of our social media outlets, whether you want to offer a product review, guitar tips & tricks or anything that happens to be on your mind.